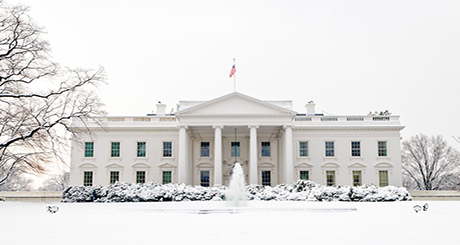 As predicted, winter storm Jonas unleashed blizzards of snow that blanketed the Eastern states white. The storm dumped over two feet of snow in some states, reaching comparable records of snowfall from previous years and was responsible for a number of accidents and deaths. While in the Southern states, the weather brought a string of El Niño storms that peaked last Sunday. It has caused floods, uprooted trees that killed one person and injured others and knocked out power to hundreds of thousands. When the storm was over, people were still left in the cold and dark as late as Monday evening.

In a different way, there is a political storm arising in America. Many have tried to forecast the winds of change in Washington, D. C.; who out of the candidates will rise to the powerful position as the next president of the United States?

Predictions and forecasts were greatly discussed on all news channels prior to Monday evening’s Iowa caucus voting. The results are in: Ted Cruz shocked America with a ‘rain on Trumps parade’ lead and gained the republican votes.   Hilary Clinton edged her way to the front, taking democrats votes over Sanders. The ears and eyes of the world are watching as these political power patterns change in America. Who will the leaders of Russia, China, Israel, North and South Korea, Britain and other countries leaders have to ally with? Both allies and enemies, I assure you, are anticipating and waiting. Their foreign policies and war strategies hang in the balance depending on the presidential winner.

As the momentum builds on both sides, the two distinct parties clash as if thunder in the sky. The storm is growing in intensity, who will crest the wave of political power in America? Christians, for the most part, are watching the storm rise. They understand a democratic win will bring a crashing tidal wave of anti-Christian liberalism. Will Christians survive another possible eight years of liberalism that could drown out the voice of the church altogether?

If the election goes badly then hang on for dear life! I doubt very much the church will be able to stay afloat. It will sink in the storm, as surely as the Titanic. A famous ship designed to be unsinkable, even by God, so someone remarked, sank and ironically words that tempted God proved fatal. This could be America’s final blow, one from which she will never arise. She will drown, as if held under the seas by other countries that are growing stronger financially and in nuclear arms production.

Therefore it is critical for Christians to vote. This will take keen discernment with the candidates. Many Americans are becoming untrusting of Trump. He has the money, seemingly powerful backing, but many are beginning to treat him with distain because of his open arrogance. He is all about self-exultation with little care on whom he tramples. Be careful Trump, there is a lesson to be learned from Herod the King (Acts 12:23); you could end up in a heap of worms!

I believe Trump has hung himself with his own words. Jesus said: Not what goes into the mouth defiles a man; but what comes out of the mouth, this defiles a man” (Matthew 15:11). Therefore, discern the heart and you have discerned the man.

Trump’s words have not gone unnoticed and they have been of great concern to well-known Joel Rosenberg. His recent blog has brought to the Christian community’s attention 32 reasons why a Trump presidency would be a catastrophe for America. It is well worth the read.

Do we really want a president that will make such candid and insulting remarks about others? Whose life entertains a liberal public’s hunger, as if they were watching a reality show of Trumps politics? Have we become that debase? It seems that the people want entertainment in the church and entertainment in the White House.

Can you imagine Trump meeting the Queen of England?  Will he handle in a dignified manner, his political duties? A president should own in his character, decorum and graces that articulate to others the country he represents. Clearly Trump, as a candidate, is lacking there presidential qualities. We should not make the same mistake in voting for a lame duck president. He might end up being an ineffectual quack.

Will there be enough righteous voters to turn the storm tides of America’s political destruction? What kind of presidential candidate would you want to lead your children and grandchildren? Consider what is at stake and in God’s name vote!

This week all eyes were on Iowa, foreign eyes of the world’s countries are on America, but when it comes down to it, all our eyes must be on the Lord Jesus Christ. May the Lord give us mercy and raise up a God fearing president. It is God, who in the end, sovereignly governs over the affairs of the nations . . .